AMENITIES ALSO CONTRIBUTE TO THE AREA'S ECONOMY AND APPEAL

With 104 locations and 300-plus community partner groups, the Springfield-Greene County Park Board is the heart of community recreation, sports and leisure.

Through sports tournaments and attractions like Dickerson Park Zoo and Springfield Botanical Gardens, parks help bring thousands of overnight visitors to Springfield. In an employee-driven job market, parks and outdoor experiences are also factors in attracting and retaining talent. The Springfield Business Journal selected the Park Board as a 2019 Economic Impact Award Honoree, highlighting sports tourism. Quality parks and trails add value to real estate, enhancing nearby property values by 10-15% and helping to bring neighborhoods together.

A well-loved park system needs constant maintenance and reinvestment, though, and to remain a hub for tournaments, Springfield needs to redevelop and expand its sports infrastructure.

As with other areas of the community, collaboration is a driving principle for the Park Board, which actively partners with more than 300 local organizations and more than 900 volunteers to provide programs, events and facilities.

A key partner is Springfield Public Schools, which has provided facilities for before- and after-school programs, sports leagues, clubs and summer camp for 20 years. SPS shares numerous playgrounds with parks, and the Park Board provides sports facilities to schools, including baseball, tennis, soccer and golf. SPS's summer Explore! program offers ample outdoor programs in parks, both as a base location and in active parks partnership.

Other partners include City Utilities of Springfield, providing low-cost long-term leases for property at Lake Springfield, Valley Water Mill and Dan Kinney parks; the Developmental Center of the Ozarks, partnering to present the Turkey Trot 5K for 25 years; Ozarks Food Harvest, collecting food donations at outdoor pools, the skate park and Turkey Trot; and all four Springfield Boys and Girls Club facilities, located in or adjacent to parks.

"Friends" groups provide financial, advocacy and volunteer support, especially Friends of the Zoo at Dickerson Park Zoo and Friends of the Garden at Springfield Botanical Gardens. Friends of Timmons Temple has completed four years of renovations at historic Timmons Hall, which opened in 2019 as an event space with cultural, historical and educational opportunities.

The Park Board also partners with the Springfield Sister Cities Association and the Springfield Regional Arts Council to present arts and cultural events throughout the year.

Since 2017, Neighborhood Works projects have included Phelps Grove Park parking improvements, LA Wise Park Pavilion construction, refurbished basketball and tennis courts at Washington Park, an upgraded disc golf course at Tom Watkins Park and lighting and electrical upgrades as several locations. Nearly all of these projects had been on a waiting list or several years, and none would have moved forward without these grant opportunities.

The City of Springfield partnered with the Springfield-Greene County African-American Heritage Trail to designated the trail's first marker at Silver Springs Park in 2018, on the park's centennial. In conjunction with Timmons Hall, the annual Park Day Reunion and the NAACP's Juneteenth celebration, Silver Springs has emerged as a hub for African-American history and culture.

Another partner is Ozark Greenways, which builds and maintains 70-plus miles of trails and connections ranked among of the community's favorite assets. In 2018, Ozark Greenways dedicated a new segment of the Fulbright Spring Greenway including a bridge over South Dry Sac River, and Wilson's Creek Greenway was designated as the system's third National Recreation Trail in 2018. Ozark Greenways is upgrading portions of the Frisco Highline Trail, the second-longest rail trail in the state.

This year will see the launch of Springfield Bike Share, a public-private partnership to provide bicycle rentals as a healthy, cost-effective complement to existing transit services in and around downtown.

Springfield Cardinals AA minor league baseball has an average annual attendance between 320,000 and 350,000. The Springfield Lasers professional tennis team, back-to-back champions of the World TeamTennis league in 2018 and 2019, have brought internationally-ranked tennis stars to play at Cooper Tennis Complex every July since 1996.

But sports facilities need reinvestment to compete for tournament bids. The MSHSAA State baseball championships are slated to take place in Ozark's US Baseball Park 2021-2025. This same tournament was held at Springfield's Meador Park 2007-2012 and numerous previous years, before relocating to newer facilities. Lake Country Soccer, which provides leagues and tournaments at Cooper Park, has an immediate need to renovate two soccer fields, which will cost $2 million. Overall, it needs $10 million to upgrade nine fields, lights and stands, and add locker rooms. A 2019 study commissioned through the Springfield Convention and Visitors Bureau and other stakeholders identifies a need for a new convention center, which could also accommodate sports events.

Preserving green space for the future is a long-term concern, a Red Flag since 2011. Specific recommendations for expanding public parkland are included in Field Guide 2030. Since a 2010 survey, Springfield has lagged behind industry benchmarks in number of parks managed, and developed/undeveloped acres per resident. New park acquisition and development was dramatic from 2001 to 2012, when the 2001 and 2006 parks sales taxes provided capital funding. With the expiration of that funding stream, however, parks development slowed significantly.

Obesity has been a Red Flag noted in numerous previous reports, with statewide obesity rates growing from 23.9% in 2004 to a 32.5% in 2017. Greene County rates for adult obesity are higher and rising, at 36% in 2019. Obesity and related health concerns are a primary motivator for parks and recreation development.

As noted in previous reports since 2009, the limited pool for parks and trails funding remains the primary impediment to numerous projects. This trend is evident across the parks and recreation community, as major groups compete to raise funds for capital campaigns. 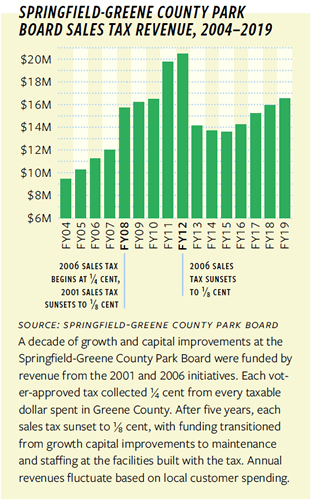 Springfield's park system is self-funded through dedicated parks tax revenue and user fees, receiving virtually no revenue from the City of Springfield, Greene County or the state of Missouri. A proposed 2011 renewal to the park sales tax was placed on hold as law enforcement, police/fire pension, education and county funding proposals took turns on the ballot.

The Park Board budget took an immediate $7 million cut when the Park Sales Tax sunset in 2012. Since then, nearly all new park and trail development has been funded by grants, fundraising and private donations. The list of unfunded parks projects now totals $47 million, including greenspace acquisition, facility upgrades, deferred maintenance and equipment replacement.

An acute concern is the new Missouri minimum wage, approved by voters in November 2018. It will affect all nearly agencies relying on seasonal labor. Seasonal workers mow grass, prepare ball fields, drive buses and officiate sports in about 400 positions. By law, minimum wage increases from $7.85/hour in 2018 to $12/hour in 2024, meaning the Park Board will spend an additional $1.3 million a year by 2024 to cover these same 400 seasonal positions. As of 2019, sources for this funding have not yet been identified.

Springfield is rightly proud of parks, trails and recreation opportunities. But until our community reinvests in these amenities, Springfield's ability to maintain this highest level of quality facilities, keep up with growth and continue economic development in sports tourism is at risk. 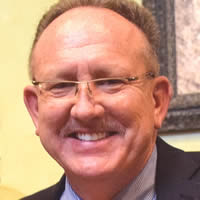 "The community is engaged in parks here. Any kind of honor we get is obviously one we share with the community."