In the area of public safety, prevention efforts and disaster preparedness have improved in Springfield and Greene County. But funding challenges remain, and the increasing flow of drugs into the areas is leading to drug-related issues, including overdoses and crime.

The past few years have seen many changes and growth in the public safety professions, including the collaboration among the city, county and community to consolidate resources and create the Springfield-Greene County 911 Emergency Communications Department in 2002, which also included the merging of the Republic 911 dispatch in 2013. A new collaboration of partner agencies, which includes the Springfield Fire Department, the City of Springfield, Mercy, CoxHealth, Springfield-Greene County Health Department, City Utilities, Missouri State University, Ozarks Technical Community College, Evangel University and Drury University, launched the PulsePoint Respond CPR notification app, which notifies trained citizen responders that someone within a half mile of their location is experiencing cardiac distress. Nearly 2,000 users have downloaded the PulsePoint app since its September 2018 launch.

In 2007, an ice storm paralyzed the area for several days, revealing a need for increased disaster preparedness. This need was addressed through the construction of the Greene County Public Safety Center and the implementation of the Emergency Management Accreditation Program. The center allows for direct collaboration of more than 70 local, state and federal agencies during emergency response and recovery operations. Since its opening, the PSC has hosted more than 65,000 people for collaboration meetings, emergency management coordination, and training events.

Cited as a Red Flag in the 2011 Community Focus Report, community and individual disaster preparedness has now significantly improved through the adoption of the Emergency Management Accreditation Program, which uses nationally recognized standards and a peer review process. In 2012, the Office of Emergency Management was the 13th local jurisdiction in the nation to receive accreditation. In 2017, the OEM was reaccredited through 2021.

Collaborative efforts have allowed the Community Partnership of the Ozarks to implement the Mental Health First Aid program, which teaches adults a five-step action plan to identify and work with someone experiencing a mental-health challenge or crisis. In Greene County, CPO and its collaborative partners trained more than 1,700 Greene County adults in Youth Mental Health First Aid to support teens who may be experiencing similar challenges. During a three-year period, those adults referred more than 18,000 youths to professional, self-help or other support strategies.

Voter-approved funding has provided more resources for public safety and order. In 2007, Greene County voters passed the 1/8-cent sales tax for 911 services, which helped to equip the Public Safety Center with state-of-the-art technology and begin the process to achieve the 911 accreditation component by the Commission on Accreditation for Law Enforcement Agencies.

In 2017, Greene County citizens voted to approve a 1/2-cent general revenue sales tax, allowing $500,000 to fund partnerships among the prosecutor's office, sheriff's office and Springfield Police Department. For the full tax, 56% was allotted toward criminal justice, 6% for environmental mandates, 25% for capital projects, and 11% for community initiatives, including $2 million to address issues surrounding mental health. This tax funded several projects, including an expansion of the Greene County Jail and the creation of the Greene County Family Justice Center, a "one-stop shop" for victims of domestic violence where they can access services of 22 partners.

In 2018 and 2019, the Springfield Police Department began implementing changes made possible by the renewal of the Level Property Tax by the City Council and voters. The funding provided life-cycle replacement of vehicles and additional sworn and civilian personnel. 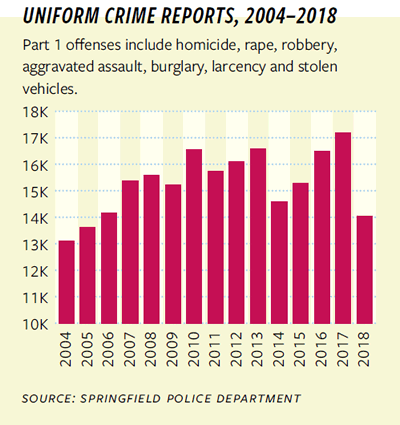 The police department will be able to add 19 investigators and three support staff over the next three years. The officers will be used to fully staff a Family Violence Unit, add property crimes detectives and create a new Vice Unit to investigate human trafficking/sex trafficking, prostitution, gambling and alcohol-related crimes. In 2019, 10 new recruits were included in the annual training academy class to begin the process of adding those new investigators.

In 2018, the police department began the annual process of using LPT funding to purchase 30 replacement police vehicles. The building of new city facilities, and the maintenance of older ones, is also a top priority for LPT funds. One SPD project Included was the renovation of the old Springfield Mill and Lumber building. The $500,000 renovation is due to be completed in November 2019 and will provide for all property crimes detectives to be housed in one building, instead of several facilities around the city.

The fire department will have funding for two new fire stations in the central and western areas of the city. The fire department's community outreach efforts through Project RED (Reduce, Educate and Deliver) Zone, a community risk-reduction program aiming to reduce home fires, fire-related injuries and deaths, has placed firefighters throughout the city providing fire safety information and free smoke alarms to those in need. Since the program began in April 2017, the department has installed 2,449 smoke alarms and 692 batteries, tested 4,511 smoke alarms, and visited more than 15,300 homes.

The effects of natural and human-caused disasters have become more frequent and widespread. As a result, preserving the public's safety and security has become more challenging. Federal funds that assist state and local governments in preparing for all-hazards disaster situations have remained at the same level for many years, even though the costs involved with preparing disaster-resilient communities continue to rise.

The Springfield-Greene County 911 Emergency Communications Department serves 13 fire agencies and nine law enforcement agencies, and transfers medical calls to local hospital-based emergency medical service providers. In 2016, a staffing study from an outside consultant identified the need for 16 additional telecommunicators, based on the workload at that time of Springfield-Greene County 911. This need continues to be an issue as the workload increases annually and the current sole funding is the 1/8-cent sales tax passed by the voters in 2007. With an estimated sales-tax revenue increase in 2019, six additional full-time employees were approved by the Greene County Commission and the City Council, which will help in reaching the staffing study recommendation.

The Springfield Police Department continues to wrestle with drug-related problems in the community. The department has seized increasing amounts of illegal drugs and responded to an increase in overdose calls related to opioids/heroin. In 2011, officers seized 4.3 pounds of methamphetamine and 0.057 pounds (26.3 grams) of heroin. Those totals surged to 32 pounds of methamphetamine and 2.06 pounds of heroin in 2018. This increase has come at a time when the department has seen a significant decrease in methamphetamine lab busts, from a high of 120 labs in 2012, to an average of three a year today. The methamphetamine seized comes from south of the border and has ties to Mexican drug cartels. It is cheaper, but higher in overall purity. 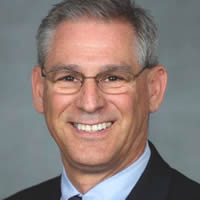 "I consider myself blessed to have had the opportunity to serve onthe Springfield Fire Department. Working in the fire service provides the opportunity to directly impact daily lives within our community. Frequently, when things have gone terribly wrong in someone's life, we were called upon to help make it a little better. I feel this is why the public holds firefighters in such high esteem. However, there is much more that makes the fire service such a special calling. Beyond being co-workers, there is a family-like bond. Like every family, there are family squabbles and some that you enjoy being around, but others not so much. Similarly, like our 'real' families, we always pull together in the time of need. We put aside our differences to make the family successful. This is why the fire service is so successful. We have a common bond where we pull together in tough times to accomplish the mission. We rely on each other. I will always look back with fond memories of my years in the fire service—the good times, the bad times, the lifelong friendships and, most of all, the people where you made a difference in their life."