Springfield and Greene County have a robust transportation network. Over the past decade we have seen tremendous investment through collaboration in the roadways, trails, sidewalks, transit system, and airport. This investment has paid off with reduced congestion, improved safety and an increasingly sustainable transportation system. A new trend is starting to emerge, however, after the economic recovery with traffic volumes increasing, but transportation investment lagging behind.

Collaboration continues to be essential to transportation advancement in the region. Springfield and Greene County have partnered with the Missouri Department of Transportation (MoDOT) to make needed roadway improvements in the Springfield area for the past 18 years. This has resulted in the construction of five diverging diamond interchanges, two major flyover interchanges, six lanes on U.S. 65 and Glenstone and South Campbell avenues, as well as numerous other major projects.

MoDOT, however, has cancelled all partnering opportunities, which means local tax initiatives are more important than ever. Local funds, coupled with the small amount of remaining federal funding, will be the only source to make capacity and safety improvements to the transportation network. The City of Springfield's ¼-cent capital improvement sales tax and the ⅛-cent transportation sales tax have been used to partner locally to fund essential transportation improvements such as widening Republic Road from Scenic to Golden avenues. Both taxes will appear on the ballot in 2016. These taxes, if approved, will continue to allow for local partnering opportunities.

Additional collaboration has occurred through a Joint City-County Planning Task Force, which developed a transportation report to identify projects, funding challenges and possible solutions. Funding with local taxes will be necessary to make these local partnerships possible.

In addition, Greene County, MoDOT, City of Springfield, City Utilities, and Springfield Public Schools (SPS) have been working together to fill the gaps in the sidewalk system by building sidewalks near school and transit bus stops.

Advances continue to be made in furthering the sustainable transportation network. Progress toward a more sustainable transportation network was first identified in the 2007 Community Focus Report (CFR). A new performance measure is tracking the completion of the planned bicycle and pedestrian network. This network, as outlined in the Ozarks Transportation Organization (OTO) Long Range Plan, has more than 30 percent of the identified sidewalk improvements completed with just over 56 percent of the miles of greenway network completed. There are currently 86 miles of Ozark Greenways trails completed in Greene County, including trails in Willard, Republic and Battlefield. The LINK, a north-south bicycle and pedestrian network, now connects Doling Park, Downtown Springfield and the South Creek Greenway Trail at Sunset Street (see Natural Environment section). Springfield continues to be a Bronze Level Bicycle Friendly Community. In 2014, the City of Springfield passed the first complete streets policy showing a commitment to provide infrastructure for bicyclists and pedestrians.

Springfield offers a comprehensive fixed-route transit service that serves more than 1.5 million passengers within the City limits. This service runs from 6 a.m. to 11 p.m. seven days a week. New technologies have been implemented that use Google maps and a smartphone app to help plan transit trips and notify passengers of bus locations. A new state-of-the-art bus transfer station will be constructed in 2015 and open in 2016. This new transfer station will result in better access for bus transfers, improved ticketing stations and the ability to accommodate larger buses. 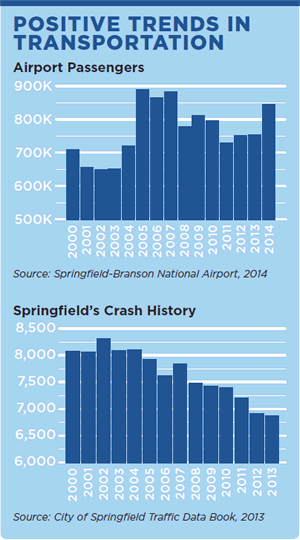 Springfield-Branson National Airport has been identified as a blue ribbon all previous CFRs. Airport facilities have gone through several major upgrades in the last six years, including a new airline terminal and fire station, rehabilitation of the primary runway and remodeling/expansion of general aviation facilities serving private and corporate aviation. A recent State of Missouri study estimated the airport has a $400 million positive annual economic impact to the region. Four airlines serve the airport (American, Delta, United, and Allegiant) providing service to 11 direct destinations, including the major hubs of Atlanta, Charlotte, Chicago, Dallas, and Denver. This gives excellent access and flexibility to the national air transportation system. With an average of 25 daily flights, airlines have seen passenger numbers grow each of the last four years, but took a significant 12 percent jump in 2014 to 846,324 passengers. The airport passed the annual Federal Aviation Administration (FAA) safety inspection without a discrepancy in January 2015, which marks 11 straight years. The airport was the recipient of a Safety Excellence Award from the FAA.

Traffic-related accidents have been declining since 2005 as documented in three previous CFRs. In 2007, a significant ice storm resulted in increased accidents. Accidents have declined, however, in every other year. This can be attributed to improvements that target high-crash locations as well as increased enforcement. The City of Springfield, Greene County, MoDOT, and the Federal Highway Administration developed, and are now implementing, a local Strategic Highway Safety Plan to identify strategies to further reduce accidents.

For the first time in history, Missouri appears poised in 2017 to return unspent federal transportation funds to the U.S. Department of Transportation. MoDOT announced the 325 plan, which reduces maintenance on the MoDOT-owned system and no additional lanes, intersection or interchange improvements. The OTO has identified 204 miles of roadways that are monitored for congestion. Under the 325 plan, 36 percent of these roadways will no longer be maintained. Additional funding is needed in order to maintain the existing roadway network in its current condition. 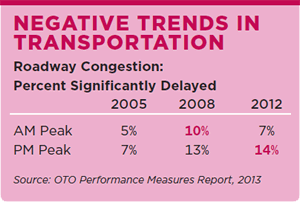 The City of Springfield and Greene County have partnered with MoDOT to make essential improvements such as adding lanes on U.S. 65 and the construction of five diverging diamond interchanges along U.S. 65 and I-44. Improvements like these will no longer be possible, unless Missouri can find a way to increase revenues for transportation.

While great strides have been made in building a sustainable transportation network, a great need still exists to build sidewalks near schools. The shortage of adequate sidewalks creates an unsafe situation for many children in Springfield. The Healthy Living Alliance, which conducted walkability audits, provided signs and bicycle repair stations along The LINK, and provided education on bicycle and pedestrian safety, has exhausted a CDC grant that helped Springfield make great strides in sustainable transportation (see Recreation, Sports and Leisure section). Additional funding has yet to be identified to continue these efforts. Meanwhile, there is an increasing need for bicycle education and safety instruction for all ages and ability levels as additional bicycling facilities are being provided.

For the first time in history we are faced with returning unspent federal transportation funding for the simple fact that the revenue shortage in Missouri will not provide enough matching funds to qualify for all the federal funds available.

Funding for public transit has continued to decline. This steady decline in both federal and state funding, coupled with rising fuel and bus replacement costs, increased wages, and increasing maintenance costs, has resulted in an inability to make needed improvements to transit. Buses continue to be in service that are beyond their useful life with many buses more than 15 years old. Without federal funds for new buses, City Utilities has purchased refurbished buses in an effort to continue to provide the current transit service. Eight of the 25 buses in service have not been refurbished or replaced since 1997 and 2000.

While City Utilities offers both a fixed route and an on-demand paratransit service for riders with disabilities, a great need still exists for elderly customers. OATS is able to provide service for both elderly and disabled riders in the Springfield area. They are not able, however, to meet the increasing demand for door-to-door transportation service. There were more than 2,304 requests for rides that were not able to be granted in 2014. In addition, no service exists for urgent care or emergency room trips for those who cannot afford a taxi service.

There was a decline in commute time noted in the 2013 CFR. The 2013 American Community Survey, however, has identified a slight increase in commute times for Springfield and Greene County. Both Springfield and Greene County have partnered with MoDOT to construct capacity-increasing improvements. But declining state revenue will severely hinder future partnership efforts. Traffic is likely to increase due to the rebounding economy resulting in lower unemployment and more retail activity. Transportation investment will not be able to keep up with traffic demand, resulting in increasing traffic congestion for the region.

Further hindrances to needed transportation improvements are expected in 2016, when the Environmental Protection Agency is expected to announce new air-quality standards. Springfield has continued to make improvements in ozone emissions, but these improvements are not likely to be enough to avoid non-attainment status in the future (see Natural Environment section). Therefore, it is likely that proposed transportation projects will have to prove they will not negatively impact air quality before going forward, making it very difficult to build any new roads or add capacity to the existing roadway network.