Springfield and Greene County have an abundance of recreation, sports and leisure options, including public libraries, playgrounds, trails, natural areas, sports leagues and facilities, golf courses, and recreation centers. The Springfield-Greene County Library District and the Springfield-Greene County Park Board strive to make services accessible to a broad population of residents. Libraries and parks consistently earn top ratings in citizen surveys. Program participation remained strong through the recession and continues to grow. 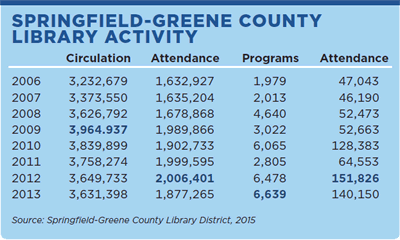 Springfield's spirit of collaboration is at the core of the community's recreation, sports and leisure opportunities. The Park Board alone has an ongoing partnership with some 300 local nonprofit groups, businesses and institutions, providing important community connections. Without these collaborative relationships, many programs, events and facilities would simply not be possible.

"Friends" groups provide invaluable volunteer and financial support for libraries and parks. Friends of the Library promotes a positive relationship between the Library and the community. Friends of the Zoo assists with operations, park development, education programs and field conservation support at Dickerson Park Zoo. Friends of the Garden helps build, maintain and advocate for the Springfield Botanical Gardens at Nathanael Greene/Close Memorial Park.

The Park Board partners with the Springfield Sister Cities Association for the Cherry Blossom Kite Festival and Japanese Fall Festival, the Developmental Center of the Ozarks and Ozarks Food Harvest for the Thanksgiving Day Turkey Trot, Springfield Regional Arts Council for Artsfest, the Downtown Springfield Association for Concerts at Founders Park, and Community Partnership of the Ozarks for National Night Out. 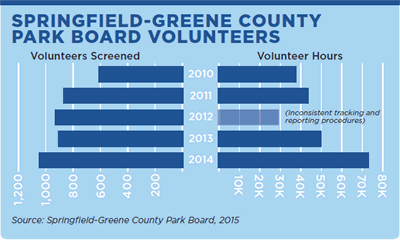 Volunteers are the backbone of many programs and events (see Citizen Participation section). In 2014, the Park Board screened 1,049 volunteers, including youth sports coaches, zoo volunteers, senior program providers, and gardeners. Combined, these volunteers reported more than 73,000 hours of service. According to the Independent Sector, volunteer service is worth $21.17/hour in Missouri, which makes parks' 2014 volunteer services worth more than $1.5 million.

The Park Board celebrated its centennial in 2013, marking 100 years since Springfield voters first committed to funding parks. Community support and active use of parks facilities, combined with dedicated stewardship and expansion, have created one of the best public parks systems in the country.

Historic Timmons Temple recently relocated to Silver Springs Park. The nonprofit group Save Timmons Temple raised funds to move the church, and continues fundraising for remodeling. When complete, the Park Board will operate Timmons Temple as an event center.

Here in the Show-Me State, we're fortunate to have a wealth of opportunities for outdoor recreation that we value deeply ... not only for what they do to improve our economy and quality of life, but for their role in preserving an outdoor heritage that is a fundamental part of our identity as Missourians.

Ozark Greenways trails are busy with walkers, runners and cyclists. The nonprofit Ozark Greenways has now developed 68 of the 120 miles originally identified for the community's trail system, including recent expansions at the South Dry Sac Greenway, Fassnight Creek Greenway, Ward Branch Greenway, and sections of the Cherokee Trail of Tears.

Greenway trails were further enhanced with development of The LINK (see Transportation section), a north-south on-street route for walking and bicycling, linking greenways, neighborhoods and activity centers. Development of Two Rivers Bike Park near Nixa has also buoyed cycling and bike tourism in the area.

The Healthy Living Alliance (HLA), founded in 2011 and involving more than 30 agencies, made inroads in addressing obesity, including the Local Sprouts farm-to-childcare food collaborative and the Walkable Neighborhood Project. Initial federal funding for HLA has now expired, but the Community Partnership of the Ozarks has absorbed some HLA programs.

Combating obesity is a driving force for the Park Board, particularly through family centers, sports leagues, children's activities, and Greenway trails.

Preserving land for future parks and wildlife is a long-term concern, a red flag since the 2011 CFR. Specific recommendations are included in Field Guide 2030, in both its Recreation & Leisure and Growth Management & Land Use sections. It is essential to set aside land in new neighborhoods and retail centers for future parks and stormwater management needs.

The Park Board is entirely self-funded through dedicated parks tax revenue and user fees. Parks receives no funding from the City of Springfield, Greene County or the State of Missouri.

Continuity of parks funding has been a red flag since the 2009 CFR—three years before the sunset of the 2006 Parks Sales Tax, which funded significant parks and stormwater capital improvements. Since the sunset, parks growth has slowed considerably.

Follow Greene County's progress on many of the categories mentioned on this page, including obesity and fitness center rates, at Community Commons.