The Springfield-Greene County area has long been touted as a location with a low cost of living and affordable housing plays a large role in that reputation. However, low housing costs only show one aspect of the equation. Housing must also be available, safe and of sufficient quality to provide the best benefit to the community. While significant gains have been made in some areas, our lower-income citizens are having difficulty finding quality affordable housing in convenient locations.

Three new initiatives were implemented since the 2013 Community Focus Report (CFR). These initiatives provide not only housing, but access to various services for our homeless population. 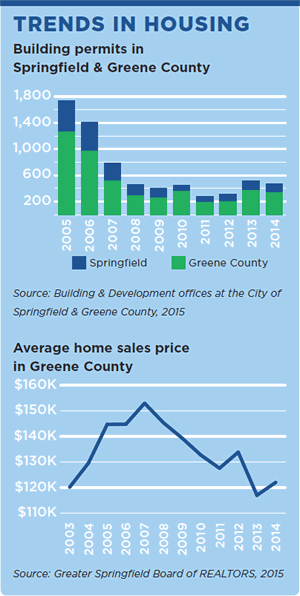 A new model called Housing First is being implemented in Springfield and around the country to focus on providing people experiencing homelessness with housing as quickly as possible—and then providing services as needed. Once housed, individuals and families can receive services such as medical care, mental-health treatment, intensive case management and more. This approach has proven to be more successful and less expensive than mainstream homeless service programs.

Locally, The Kitchen, Inc. has adopted this program and is transitioning its program at the Missouri Hotel to the Housing First model. While this will bring an end to its Transitional Housing program, it is an important step to ending the cycle of homelessness for hundreds of chronically homeless individuals in our area.
Addressing homelessness for veterans also is a national initiative that our community is implementing. The Supportive Services for Veteran Families (Home at Last) is a five-year initiative to provide permanent, supportive housing to veterans and their families. The Springfield community also has received Veterans Administration (VA) Supportive Housing vouchers, which provide permanent housing to veterans through a public housing voucher and case management support from the VA.

Beacon Village is a new housing development to help meet one of our community's most critical needs—quality affordable housing for under-resourced citizens. The development is a collaboration among several organizations, including The Kitchen, Inc., partnering with Housing Plus, LLC, and supporting tax credits from the Missouri Housing Development Commission. The opening of Beacon Village is a milestone in this community's progress toward ending homelessness. It provides 44 units of affordable permanent housing for income-qualified individuals and families, including 20 units for formerly homeless families. In addition, The Kitchen, Inc. has received funding to build another 32 units in Beacon Village Phase II.

The Homeless Camp Protocol created by the City of Springfield has formalized a process for responding to identified homeless camps. This protocol incorporates the direct connection of those living in the camps with local service providers and extends the amount of time the individuals have to vacate the property. When a call comes in to the city or the police notifying them of a camp, the Affordable Housing Center/One Door is contacted and coordinates local providers/advocates to assist with relocation efforts. This results in jail diversion and connects the homeless individual with stabilizing services.

Habitat for Humanity of Springfield applied for funds with the Federal Home Loan Bank of Des Moines, Iowa, to assist Springfield homeowners in making critical home repairs. Habitat has been awarded three such grants totaling more than $750,000. Guaranty Bank stepped up to serve as the partnering organization in order to make the program a reality.

These grants average about $5,000 each, allowing approximately 150 Greene County homeowners to make improvements. Repairs for this program range from replacing sewer lines to upgrading electrical wiring. This partnership of the Federal Home Loan Bank, Habitat and Guaranty Bank has revitalized homes and, in turn, neighborhoods in our community.

The Springfield Community Land Trust (SCLT), as mentioned in the 2013 CFR, is a fairly new program available to citizens who would not otherwise be able to afford a home in the private market. The SCLT acquires mainly foreclosed homes and also substantially rehabilitates the homes to meet high energy-efficiency standards and improve overall quality. The homes are then sold to families with limited incomes.

In just five years, SCLT had purchased 22 homes and sold 11. Nine of the remaining homes have been rented to qualified renters and two are available for purchase. The energy-efficient homes cost less for the homebuyer than the average market price because homebuyers purchase only the house and lease the land from SCLT.

Federal funding reductions were listed in the 2013 CFR as a red flag. While funding has not increased, it has stabilized at lower levels. The demand, however, continues to outpace the available funding for many programs. For example, families applying for low-income housing vouchers face a two- to three-year waiting list to access housing. 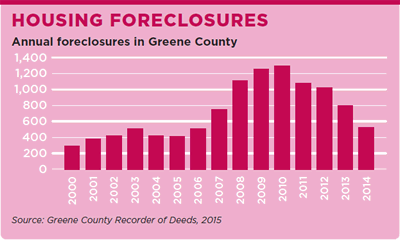 Foreclosures, also mentioned in the 2013 CFR, continued their downward trend in 2014. Reaching a high of 1,297 in 2010, foreclosures dropped more than half to 514 in 2014. While the decline is a positive trend, the 2014 number still eclipses 2006 when foreclosure problems started to surface.

The increase in consumer energy prices, together with high unemployment and a lagging local income growth among lower- and middle-income households, exacerbates the need to find ways to reduce the impact of energy costs on families.

In Springfield, more than two-thirds of families spend a disproportionate share of their household income on utility bills. Typically, families earning below $50,000 per year pay 15 to 18 percent of their income on home energy costs. This compares to 2 to 10 percent for an average household.

While many lower-income consumers qualify for energy assistance, government programs are hard pressed to keep pace with the escalating energy prices. Programs like Ozarks Area Community Action Corporation's (OACAC) Energy Assistance and Energy Crisis Intervention programs provide assistance to low-income households, but have difficulty keeping up with the demand. Since October 2014, OACAC has assisted 18,880 households with winter energy assistance. The number of households assisted in 2015 trends very closely to statistics from the previous year.

As noted in the two most recent CFRs, the lack of emergency shelter beds continues to hamper efforts to house the growing homeless population. Recent survey and public engagement efforts reveal a critical need for immediate overnight shelter for families and single adults. Statistics from The One Door program provide further evidence of the increasing number of requests for this type of shelter. This adds to the increasing need for crisis shelters for those fleeing domestic violence, as well as those leaving care institutions into homelessness, and a previous red-flag issue—homeless unaccompanied youth.

An often-overlooked aspect of the affordable housing issue is the need for affordable housing in close proximity to public transportation. Many individuals and families in the lower income levels can't afford to own a car and need access to public transportation to go to and from work, to medical appointments or simply to buy necessities such as food and clothing. The recent closing of the Price Cutter on Commercial Street was the subject of a February 2015 Springfield News-Leader article highlighting the hardship of grocery shopping for families without cars. According to the article, a cashier working at the store estimated that half to three quarters of the people who shop there carry their groceries home. Unfortunately, Springfield does not have an extensive public transportation system to address this problem and many affordable housing developments are not located on a bus line.

Years of disinvestment, due largely to the housing market collapse and the Great Recession, have left the area's housing stock in a deteriorating condition. A recent housing survey conducted by the City shows the number of substandard units increasing and those units considered "standard" are decreasing. This issue has a greater impact on the county's lower income citizens as they typically live in older housing inventory where a larger percentage of these problems are found. Additionally, deferred maintenance in area housing has led to an increase in requests for emergency home repairs. Some of the top requests include roofs, doors, windows and plumbing issues.