Springfield continues to be recognized for its clean, accessible natural environment—rivers, lakes and streams accommodate boating, fishing and swimming. An abundance of close-in hiking and biking areas welcomes residents and visitors. Citizens have long recognized the economic, human health and recreational benefits of a healthy natural environment. Faced with the potentially very expensive "perfect storm" of costs associated with aging infrastructure, increasing environmental regulations and unmet infrastructure needs, the community faces its single most expensive challenge—an estimated $1.6 billion price tag, which must be balanced with other staggering needs of our community.

Inherent in our community's commitment to protect the health of our natural environment is valuing and recognizing the necessity of a strong local regulatory authority. We continue to work closely with and support the Missouri Department of Natural Resources (MDNR). In cooperation with MDNR and the U.S. Environmental Protection Agency (EPA), the City of Springfield, Greene County and City Utilities of Springfield continue to make important progress in exploring an integrated approach to environmental compliance responsibilities—perhaps the first community in the country to use this approach to air quality, water quality (stormwater, wastewater and drinking water) and land components. A Citizens Environmental Priorities Task Force (pdf) completed its work at the end of 2014, identifying issues that our citizens find to be priorities and articulating the values held.

As a place to conduct business, compared to other communities in which we have a business presence, there is a lower cost associated with our environmental responsibilities in Springfield, by a wide measure. I think a great deal of that has to do with the proactive nature of the community, going back many years. This integrated planning effort is the perfect complement and the logical evolution from where we have come—balancing cost and efficiency with our ongoing commitment to protect our natural environment, which is so critical to both the health of our citizens and our economy.

Following the work of the Ozarks Regional Food Policy Council, as well as the completion of the multi-million dollar Farmers Market of the Ozarks development, an upsurge in awareness of and demand for locally produced food is being seen. A proposed Food Hub, providing product consolidation, marketing and distribution will complement the local growing efforts.

Cooperative projects and collaboration among government, nonprofits and citizen volunteer organizations speak to the value placed on protection of the water quality of our region's lakes, streams and rivers for drinking water, recreational use and to support the very lucrative regional fishing industry. This has been recognized as a blue ribbon since the 2009 Community Focus Report (CFR). Progress continued on the Springfield-Greene County Urban Watershed Stewardship Project (Big Urbie), a three-year, $1.1 million project funded by an MDNR grant, leveraging $730,000 in local match to accomplish more than 20 projects as well as education and water-quality monitoring. The largest project, reconstructed parking lots at the City Government Plaza, serves as a highly visible demonstration of various best management practices, including stormwater.

Springfield remains in attainment of the Ground-Level Ozone and Particulate Matter 2.5 Design Values (standards). The Ozarks Clean Air Alliance (OCAA)—stakeholders in a 15-county area in southwest Missouri—along with local community leaders and media continue efforts to raise awareness of air-quality concerns, and promote activities and practices that reduce air pollution via proactive practices. OCAA has been instrumental in assisting the Joplin area in the establishment of a similar organization. Youth education programs and teacher resources are now available to assist both formal and non-formal educators. Commuting programs are available through OzarksCommute.com as a part of ongoing regional efforts. 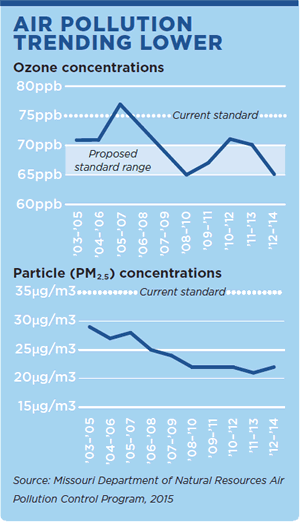 Through an exclusive Purchased Power Agreement with Strata Solar to provide 4.95 MW gross electrical energy to the grid, installation of City Utilities of Springfield Solar Farm was the largest in the state of Missouri when completed in June 2014. The solar farm can produce approximately 9.6 million kilowatt hours of renewable energy each year. CU continues proactive efforts to meet or exceed environmental requirements with ongoing upgrades and improvements.

Innovation and willingness to work with regulatory agencies, supported by an excellent track record, has earned Springfield the opportunity to address wastewater collection system improvement requirements via an extension of the successful $50 million "Early Action Plan." Investments made in keeping stormwater out of the sewage collection system, instead of merely investing heavily to accommodate higher volumes at the treatment plant, have resulted in a 12-to-1 return on the City's investment in the collection system upgrades. MDNR has approved a second-phase plan—$200 million over 10 years—potentially saving the ratepayers millions of dollars over the period of the complete improvement projects, compared to a traditional Overflow Control Plan.

As mentioned in the 2013 CFR, walking/biking routes continue to be added. The LINK, an accessible route for walking/bicycling on streets with low traffic volumes and slow speed, connecting greenway trails and activity centers, was expanded and is now marked from Doling Park to Missouri State University (see Transportation section). Talmage Trail was constructed from Doling Park to Summit Avenue. New and existing sidewalks were repaired or reconstructed to provide an accessible walking route on at least one side of each street along the LINK. Two Cycle Aid Stations have been installed. Sidewalks have been added or improved to provide a continuous route between MSU and South Creek Trail. A path under Chestnut Expressway at Ozarks Technical Community College and a signalized crosswalk on Sunset Street are under construction. Fassnight Trail and Ward Branch Trail each saw expansions and underpasses were added for safety and convenience.

Based on the input of a community-wide strategic planning process during the 2006-2007 school year, Springfield Public Schools (SPS) introduced the Wonders of the Ozarks Learning Facility (WOLF)—an innovative school accommodating two classes of fifth-grade students—with instruction that includes the same core curriculum as other SPS fifth graders. While their physical classroom is at America's Wildlife Museum & Aquarium on the Bass Pro Shop campus, students spend a substantial amount of time engaged in hands-on inquiry "in the field" with the difference being that all subjects are taught in the context of nature and conservation education. Two new programs have been added: A middle-school program—"Careers in Conservation" for eighth grade and HAWK (Honoring Urban Resources and Acting With Knowledge) courses integrating traditional biology and English through the lens of conserving urban resources (see Education section). Partners for the three very successful programs include MDNR, SPS, Missouri Department of Conservation, the City of Springfield, and the Museum.

Building upon the continued commitment of the Urban Tree Canopy Policy, combined with strong citizen volunteer support from the Tree City USA Citizens Advisory Committee and Ozark Greenways, Inc., the City celebrated 29 years of being designated a Tree City USA by the Arbor Day Foundation. City Utilities of Springfield was recognized for its 20th year as a Tree Line USA Utility and Missouri State University was recognized for its second year as a Tree Campus. The three combined awards earned Springfield the prestigious Triple Crown Community designation for the second year.

The estimated total cost to the community and the associated costs per household have been revealed in the findings of the Citizens Affordability Task Force. This, along with Springfield's concerted efforts to come to terms with its increasing poverty level and erosion of the middle class, make the issue of funding environmental infrastructure needs and regulatory requirements even more daunting.

Once again, at the time this report was being prepared, significant changes to federal air quality regulations that may impact Springfield are anticipated, but unknown. While some regulatory revisions have been made since the 2011 CFR, others are still pending. If Springfield fails to comply with new air quality standards, significant effort and expense may be required to address the issues of nonattainment of these standards. These may include more strict regulations on local businesses and restrictions on the types of new businesses that can locate in Springfield. This concern has been recognized as a red-flag issue since the 2009 CFR.

The lack of an adequate, long-term funding source for stormwater management in Springfield and Greene County has been classified as a red-flag issue since the 2005 CFR. In addition to the funding needed to address aging stormwater infrastructure and improve community flood protection, a dedicated source of funding is required to maintain compliance with the city and county Municipal Separate Storm Sewer System (MS4) permits for water quality protection. The Joint City-County Planning Task Force (pdf) identified the critical need for this funding as one of our community's top three immediate needs.

Water quantity issues were first recognized as a concern in the 2009 CFR. While short-term water concerns have eased with the end of a long drought period, concerns for long-term future regional water shortages remain. The Tri-State Water Coalition, which includes the City of Springfield, Greene County and City Utilities, continues to monitor water usage and perform long-range planning of water sources for our region.