As we study citizen participation in Springfield and Greene County, we consider many forms of individual engagement including voter behaviors, individual charitable giving and volunteerism. Additionally, the civic infrastructure of our community plays a role when assessing the overall citizen participation. While our community struggles with issues of participation, some reaching back to the initial Community Focus Report (CFR) in 2004, new successes have emerged.

Revitalization of the Civic Infrastructure

Opportunities to participate have existed to address region-wide issues in Springfield and Greene County, but recent improvements to the civic infrastructure have given backbone to the growing need for community involvement by citizens.

We rely on citizen input and involvement in just about everything we do. We are fortunate to have more than 380 people participating in task forces, boards and commissions and continue to create new avenues for citizens to provide feedback. An engaged community is a healthy community.

The City of Springfield has increased its infrastructure to enhance and encourage citizen involvement. It expanded the public information director position to include civic engagement and created the Citizen Resource Center, where individuals can submit citizen service requests and alert city staff of community issues.

Additionally, Springfield's university community has expanded its structure of service learning and volunteer programming for students. It established the Missouri State Center for Community Engagement, which houses service learning, volunteer opportunities and community-based research. Student engagement is further supported through Drury University's Center for Nonprofit Leadership and the Evangel Community School of Arts.

Civic infrastructure addressing community needs associated with children in poverty also has been developed through the Impacting Poverty Commission, Every Child Promise and Kids First Committee. Recent improvement in this infrastructure was illustrated when many of these groups worked together to bring youth poverty expert Dr. Ruby Payne to Springfield for a multi-day community-wide event. In October 2013, Dr. Payne met with nearly 2,000 community members through lectures, roundtable discussions and breakout sessions.

Civic health indicators from the 2014 U.S. Bureau of Labor Statistics and Current Population Survey (CPS) Supplements on Volunteering, Voting and Registration, and Civic Engagement comparing local, state and national data show Springfield residents are over 10 percent more likely to volunteer than the national average (37.6 percent locally compared to 26.2 percent nationally). This sense of volunteerism as a priority is evident particularly in youth programs. Students in Springfield Public Schools (SPS) are strongly encouraged to volunteer through a variety of channels. Students who participate in the A+ student scholarship program are obligated to volunteer at least 50 hours, and many student clubs also include a component of volunteerism. Additionally, college students participate heavily in volunteerism for Springfield and Greene County as well as nationally and internationally.

The United Way of the Ozarks' Day of Caring is another example of Springfield's volunteering nature. On Aug. 22, 2014, 1,800 volunteers contributed more than 11,000 hours benefiting 70 nonprofit organizations. The Day of Caring program continues to grow and expand each year, since starting in Springfield 23 years ago.

Charitable giving as a percentage of income remains higher in Springfield than in the surrounding areas and is markedly higher than the national average. According to the 2014 "How America Gives" study, Springfield residents gave 4.27 percent of their income in 2013, compared to 3.18 percent statewide and approximately 3 percent nationally. This is higher than all similarly sized and larger metro areas in Missouri, with Joplin (4.02 percent) as the second highest. This higher-than-average giving has been reflected in previous CFRs.

Additionally, charitable giving to local grantmaking institutions remains high. The United Way of the Ozarks recently completed a very successful year, having received more than $3.2 million in gifts during its annual campaign drive, and the Community Foundation of the Ozarks (CFO) received a record $46.5 million in contributions to charitable and nonprofit agency funds in 2014.

While charitable giving remains high, it is also changing to reflect a younger and more tech-savvy donor. The CFO provided a platform for an online giving opportunity in 2015 with the first-ever Give Ozarks Day. Nearly 150 regional nonprofits used this 24-hour online fundraising opportunity to raise more than $1 million in charitable gifts. This method of charitable development will likely change the landscape of giving and is reflected nationally in the trend to create giving days, as was exemplified in Springfield on Give Local America Day (the first Tuesday in May).

While it is difficult to determine why Springfield residents are likely to talk to or assist neighbors, but unlikely to trust them, it is possible other factors are in play. While Springfield residents may have a few neighbors they know and trust, it appears residents are unlikely to trust all their neighbors. This is reiterated when one considers the high level of alienation Springfield residents of lower income and educational levels felt when surveyed for the Springfield/Greene County Social Capital Survey Report (pdf). This inability to reach across socioeconomic lines hinders Springfield's work in creating quality bridging capital, which was mentioned in previous CFRs. Bridging capital, as described in the Social Capital Report, is bringing together individuals who are different from one another with regard to social class, race, gender, age, and other individual traits. While we as a community are effective at assisting our neighbors, we struggle to make our community members trust each other when these members are alienated due to financial instability or educational issues.

From January 2012 through April 2015, a surprising 55.56 percent of candidates in Greene County ran uncontested for state senator, state representative and City Council positions, according to the Greene County Election Summaries. This lack of competition for important decision-making positions in our community suggests a lackluster attitude about both the process of running for office as well as the impact these positions have on the community.

Springfield continues to struggle to maintain diversity in its leadership, as was mentioned in the 2013 CFR. In addition to frequently running unopposed, candidates for local and state office from Springfield and Greene County are mostly white males, which inaccurately represents our community's racial and gender makeup.

Voter turnout on local election days continues to be very low despite the opportunity for voters to participate in important local decisions. This red flag has been identified since the 2004 CFR. The Civic Health Indicators showed that only 19.8 percent of Springfield residents claim to always vote in local elections, which is significantly less than the national average of 33.1 percent. Additionally, these self-reported numbers inflate the actual voting numbers. In reality, corresponding Greene County Election Summaries note voter turnout in Greene County was 9.63 percent in the April 2014 and 12.18 percent in the April 2013 local elections. 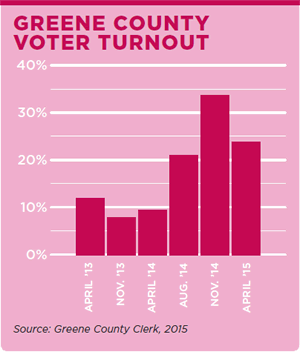 There are sometimes anomalies in voting behavior regarding local civic issues. When local elections involve a more emergent or hotly debated issue, such as the April 2015 ballot issue seeking repeal of the Sexual Orientation and Gender Identity amendment, individuals voted in higher than normal percentages, with 23.86 percent of registered voters participating. Participation, even in these circumstances, is still lower than that of national elections.

Some programs currently exist to address issues of voter turnout and engagement. In 2015, the League of Women Voters of Southwest Missouri introduced a new method of interacting with local political candidates. This event, "Candi-dating," allowed small groups of citizens to meet candidates in a speed-dating format. Citizens and candidates held rapid five-minute conversations before moving to the next candidate. This method has been well received nationally and is being implemented by other communities. SPS also is involved in addressing voter engagement through government curriculum in all K-12 social studies classes and the continued inclusion of a one-semester civics class (Liberty and Law) required for all students to graduate. These programs exemplify civic dedication to the meaning of citizenship as Greene County grows and changes.