Sometimes the big kid on the block can sit back and take it easy. As Missouri's largest school district, Springfield Public Schools (SPS) boasts considerable assets: Successful students, high-quality teachers, a supportive community, not to mention innovative programs that pull out the individual strengths of students.

With size comes challenge. Shifting demographics, such as the rising number of students from low-income families, call for a change in the way SPS addresses student performance. Are resources like computers and tablets distributed equally across the district? Are students graduating with the knowledge and skills they need for college or career? And how does the district bridge the achievement gap for students in poverty?

Many of the answers are coming from the district's change in leadership, the hiring of a new superintendent. Dr. John Jungmann's "Listening and Learning" tour, conducted in the first few months of his tenure, is providing direction for the district and a foundation for this report.

The line of students in caps and gowns at SPS commencement ceremonies is getting longer. Since the 2013 Community Focus Report (CFR), the four-year graduation rate has increased by three percentage points and surpassed the state average by even more. The 2014 rate of 89.4 percent represents a graduating class of 1,655 students with diplomas in hand, ready for the workplace or college. This compares to Missouri's average rate of 87.3 percent. This was accomplished while meeting the most rigorous graduation rate standards set by the state. 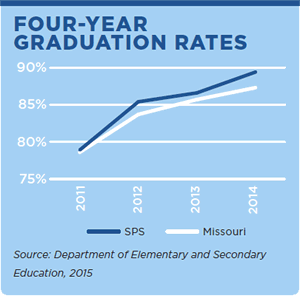 To fully appreciate this blue ribbon, the increased graduation rate should be paired with the dropout rate. Here, SPS shows a trend line that continues to decline. In the 2013 CFR, the SPS rate was 2.6 percent, slightly higher than the state average. In 2014 the rate dropped to 2.3 percent, the lowest in four years and lower than Missouri's average of 2.5 percent.

Taking the long view, this blue ribbon translates to more earning power for graduates and less demand on social services. Because SPS graduates do better, the community does better.

The Springfield community has a rich history of robust partnerships created to support the success of students. Innovative partnerships such as the Academy of Exploration (Discovery Center), Health Sciences Academy (Mercy) and Wonders of the Ozarks Learning Facility (WOLF) program (Bass Pro) provide authentic, engaging learning options for students. In the past year, SPS extended the reach of these experiences by leveraging blended learning. Blended learning, as the name implies, allows students to learn from a combination of online and face-to-face experiences. HAWK (Honoring Urban Resources and Acting with Knowledge) provides students with a double block course integrating science and English and connects them with community conservationists and field experiences. The arts community has rallied around the John F. Kennedy Center's Ensuring the Arts for Any Given Child (pdf) initiative (see Arts and Culture section), crafting arts programming for students in grades K-8, allowing all children to grow and learn through experiences with art, music and dance. Impressed by the reach of the Any Given Child program, a community partner worked with the Community Foundation of the Ozarks (CFO) and SPS to create My Studio to Go, a project that puts art materials into the hands of under-resourced students.

The Springfield community values and supports its school district, but there is a strong desire for it to become even better. At SPS, we want to empower and support all students to discover and pursue their potential, so my entry plan report outlines strategies that will help us achieve that outcome potential.

Stakeholder input gathered during Dr. Jungmann's Listening and Learning Tour revealed a desire to leverage the existing P-20 Council to connect students across the region with partners in business, industry and education. Area superintendents and businesses are working to launch the Greater Ozarks Center for Advanced Professional Studies (GO CAPS) to increase relevant, college and career-ready educational opportunities for high school students. The program will increase the availability of internships and shadowing experiences that help students and educators understand the community's quality careers.

Additional opportunities will be available due to a Lumina Foundation grant that was recently awarded to Springfield. Named as one of 20 cities nationwide to receive a Community Partnership Attainment grant, Springfield's community team will work to ensure that 60 percent or more of our students receive post-secondary degrees or credentials by 2025. The grant committee affirmed the current partnerships in place to support learning, noting that a focus on collective action would increase the impact on our students. 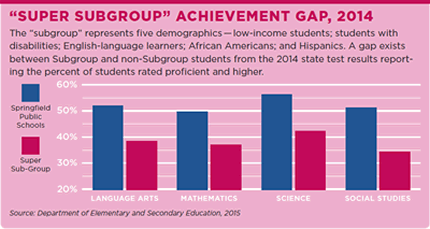 Noted as a red flag in previous CFRs (2011, 2013), the achievement gap between certain groups of students remains a concern. While efforts to personalize student learning to increase individual academic achievement was cited as a blue ribbon, the average achievement of some student groups remains behind their peers. The District also has identified potential opportunity gaps for students living in poorer areas of Springfield, who could have less access to personalized learning initiatives such as technology and choice programming, and thus remain unable to realize the potential academic benefit these options afford. 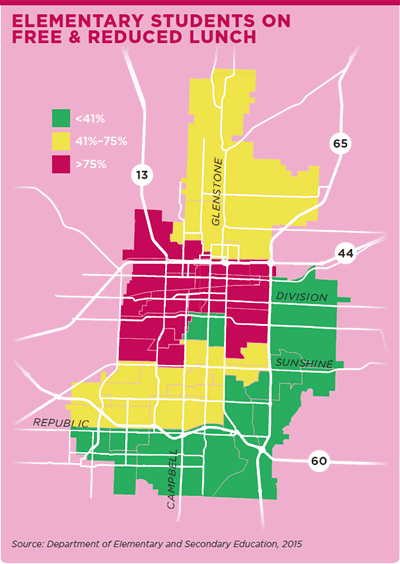 Several factors contribute to these gaps. While Springfield has long been a community of neighborhood schools (for example, 37 elementary sites) that play an integral role in the neighborhood culture, each school's demographic mirrors the neighborhoods within its boundaries. While the district's overall free and reduced lunch rate is 54.6 percent, the poverty rates of individual school sites vary greatly. Because poverty is a central factor in student academic success, the District and community must focus resources on students living in poverty to address the achievement and opportunity gaps between these students and their well-resourced peers. The District has targeted significant resources—both in additional personnel and Title I supported services—to address the needs of students living in poverty. Still, the reliance on site-based fundraising and/or use of teacher-initiated grants and individual donations to fund supplemental technology, field trips, classroom enhancements, and site-specific physical improvements has expanded the opportunity gaps. The community and District must commit to equity of resources and a firm belief that where children live within the city should not define their academic opportunities.

Recent district initiatives, expanded summer school with provided transportation and Missouri College Advising Corps (MCAC), are intentionally directed to all students but will likely affect the achievement and college readiness of students with identified barriers to academic success. The MCAC is a program developed to provide college advisors who are recent first-generation college graduates to high school students to help them navigate through the complexities of attending college, such as college applications, financial aid, college visits, and admissions. Currently in two of the five high schools, MCAC is expected to expand to at least one more high school in 2015-16 with financial assistance from a matching grant through the CFO.

Focused community and District efforts to improve equity of access to early childhood education also should result in a decreased achievement gap, although evidence of the success of these efforts will be difficult to assess in the short term and will need to be measured throughout the K-12 years of the individual student.