New Transit Options Expand with Improvements for Bicyclists and Walkers

Springfield is making great strides toward improving walkability, and integrating that with bicycle and vehicular traffic, according to a new white paper released today from the Community Focus Report.

From 2018 to 2019, Springfield developed a walkability guide while participating in the National Association of Chronic Disease Walkability Action Institute. The document, adopted with a resolution by Springfield City Council on June 3, 2019, created guidelines for the city and led to funding for walkability projects.

This year, the Community Focus Report — the biennial report card of strengths and challenges in Springfield and Greene County — is releasing detailed white papers focused on the 11 key areas ahead of the printed report, which will be released on Oct. 21.

The effort to integrate transit options includes a $21 million grant through the U.S. Department of Transportation's BUILD Grants program to finance the Grant Avenue Parkway project, a three-mile off-street pedestrian and bicycle pathway along Grant Avenue between Sunshine and College streets. It fills a vital gap in the Ozark Greenways trail network while connecting Wonders of Wildlife to downtown, and linking to parks, neighborhoods and schools.

There is a heightened interest in connecting trails and improving outdoor pedestrian areas – including the Renew Jordan Creek project, an effort to daylight the creek. In 2019, the Ozarks Transportation Organization awarded more than $4 million in funding for sidewalks, trail and trail planning services, with a goal to connect the trail system within Springfield to surrounding communities. Such multimodal efforts reflect a Blue Ribbon this year.

Advocacy and awareness for walkability and pedestrian safety have increased, too. The SGF Yields and Mr. Walker programs, developed by the City of Springfield's Public Works and Police departments, help combat pedestrian fatalities and educate the public about crosswalk rules and guidance. The neon-yellow Mr. Walker mascot has become a “city spokesperson,” bringing messages of safety through service announcements, flyers, social clips and 20 life-size statues that appear around town. The efforts are working, too. Only 25% of drivers would yield to walkers in 2017; today, compliance has risen to 40%.

While interest in making Springfield more walk- and bike-friendly is high, the city remains most easily navigated by vehicle, which is why several projects to improve existing roadways have been welcome. Most significantly, a portion of U.S. 65 pavement was replaced in 2019. In 2019, Springfield voters renewed the city's 1/8-cent transportation sales tax, agreeing to extend the sunset provision to 20 years instead of re-visiting the ballot issue every few years as funding cycles were completed. Yet, with the state fuel tax rate still at 17 cents per gallon, the second lowest in the nation, many priority projects are left underfunded. 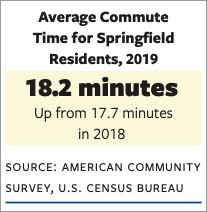 Citizens without cars must rely on City Utilities Transit, the public bus system which many find inadequate or inconvenient compared to other forms of travel. While some commutes are as low as 20 minutes, most take between 30 minutes and an hour. This is a recognized barrier for many low-earning workers in the Springfield area and, while there have been some improvements, remains a Red Flag.

The complete list of Blue Ribbons and Red Flags for Transportation can be found in the white paper.

Find this article at